One sensor that has not been mentioned previously is the “ball detector”. The ball detector helps us to easily detect when a ball has been “caught” by the dribbler and is in a position ready to be hit by the kicker.

The detector is implemented using a classical opto-isolator idea. On one side of the dribbler we put a small infrared LED, that will be constantly emitting infrared light. On the other side of the dribbler, we attach an infrared photodiode (or, to be more precise, we actually use a slightly more sophisticated breakbeam sensor). Now, whenever there is no ball in the dribbler, the sensor will be “seeing” the light from the IR led and produce an “off” (i.e. 0V) signal on one of its pins (note that a conventional photodiode would work the other way around). Whenever a ball comes into the dribbler inbetween the LED and the sensor, it will hide the light from the diode, the signal will go up to “on” (i.e. 5V), and this can be sensed by the controller.

Of course, in theory we could detect the fact that the ball is in the dribbler purely from the camera image, but having a dedicated ball detector sensor is easy and convenient.

A coilgun, is the part responsible for kicking the ball. As you might remember from an earlier post, it consists of a solenoid (coil), a capacitor, a metal bar, a spring and a controller circuit.

There are thousands of tiny details that must be decided upon in order to make a coilgun: you need to choose the material of the metal bar, the force of the spring, the parameters of the wire comprising the coil, the diameter and number of turns of the coil, capacity of the capacitor and its operational voltage. Ironically, despite the abundance of those details, in the end there is just one simple thing that matters: the coilgun must kick the ball strongly enough to send it to the opponent’s goal.

Understanding how each of the above parameters influences the strength of the kick requires patience and a solid knowledge of high school physics and beyond. We won’t go into this here, but here’s a brief overview of the main issues that matter:

In order for the kicker bar to jerk strongly enough, the coil must produce a strong magnetic field.  In order to produce a strong field, strong current must flow through the coil, the coil should have many turns and the turns should preferably be small. In order to produce the strong current over a long wound wire we need higher voltage and a large capacitor.

Although in principle it should be possible to come up with a “theoretically perfect set” of parameters which result in the lightest possible, yet functional coilgun, we went along a simpler route of reusing the practical knowledge of our predecessors and intuition:

The resulting coilgun works fine, but it is so strong that it could have been way lighter. If you, dear reader, happen to be in the mood for doing some exciting physics exercises, I dare you to use science and come up with a better set of coilgun parameters.

To make the actual coil we used an old electromagnet of unknown origin (perhaps a lock or something) which was kindly provided to us by our fellow Tartu team EKRS.
We replaced the wire with our own (on one of the previously posted videos you may actually find a hidden moment, where Reiko is seen in the process of winding the coil using a lathe), added a metal box (which you can see being machine-milled on that same video), and attached everything to the first floor of our robot. 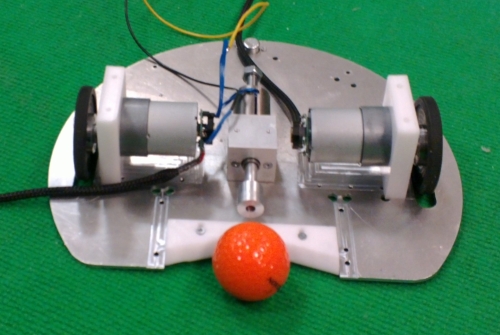 Unfortunately, we do not have a lot of “in progress” photos of the coilgun making. Here is, however, a nice view of the EKRS robot body together with a coilgun control PCB (same as ours), a large capacitor (ours is slightly smaller) and a coil while it was still being developed:

Another Tartu team had their capacitor explode with a loud and scary boom. So, dear reader, please beware: large capacitors can explode easily and violently when connected incorrectly, used with invalid voltage, or damaged:

And finally, here’s a video demonstrating the Telliskivi coilgun in action:

In theory, the dribbler is just a rotating rubber shaft. In practice, making this seemingly simple component is not as trivial as it might seem.

The video below illustrates the functioning of a completed dribbler:

Laser cutting is good for making flat sheets, but not enough to produce 3D shapes. CNC (Computer Numerical Control) milling is the way to make those. As with laser cutting, you can order CNC services at a reasonable price nowadays. It was even easier for our team – Tartu University’s Institute of Technology has a mill available and Taavi knew how to use it.

The CNC machine is programmed using a special programming language – the G-code, where each instruction corresponds to some movement of the mill. Ironically, despite the obvious practical importance of this language, most programmers or computer scientists have probably never even heard of it. If you are one of them, take a minute to educate yourself and skim through the Wikipedia entry, at least.

Although the CNC code can in principle be generated by CAM systems straight from the 3D CAD-model, it was easier for us to write the program manually, as it allows to account for the specifics of the particular machine in our case.

In the video below, Taavi is running the code he wrote for cutting the coilgun box for the Telliskivi robot:

And if you think this is cool, you might want to take a look at what the expensive industrial CNC mills can do in the hands of expert programmers: (one), (two).

The first Robotex competition took place in 2001. Although I did not take part then, I remember observing with interest the progress of Tartu University teams. Looking back 10 years now, it is fascinating to see how much changed since.

One of this changes is the perhaps wide spread of affordable computerized manufacturing. Laser cutters and CNC milling machines have existed for years now, but it seems that in just the last 10 years has their use become accessible to pretty much anyone who needs it. The more recent 3D printing can’t go without mention – one can get a reasonable tabletop 3D printer at the price of a high-end laptop nowadays.

So for those of you who are new to this thing, here’s a brief example of how things work in the marvellous world where one does not need to know anything about saws and hammers in order to create hard metal objects.

First, we use a CAD system (SolidWorks, in our case), to create a model of the part. This requires some knowledge of the CAD system, but it is not rocket science, really.

Next, in order to order an actual part from this model, we need to create two files:

Note that depending on the manufacturer, additional files may be required in certain format as a specification, but in our case this was sufficient. You then send the specification to the manufacturer and wait. Most commercial manufacturers would typically produce parts in batches of at least 100 or so, so if you need just one, you would often have to come up with a personal arrangement.

The price range differs depending on the manufacturer (some have cheaper, less precise machines, some have better ones), chosen material (cutting thinner material requires less power) and personal arrangements. In particular, the total price of computerized manufacturing for the single part shown above, including material (1.5mm aluminium sheet), is less than €20, and can be significantly less, if you manage to get a good deal.

The Robotex course requires participants to present their progress once each week. This automatically imposes an iterative approach to development – instead of working for a long time and coming up with a final design for the robot, we had three iterations – two preliminary drafts and the final one. The design was made using SolidEdge first (because Taavi was more familiar with it) and SolidWorks later (because Reiko was more familiar with it). Both programs are well-known industrial CAD packages. The former provides a student licence to anyone. With the latter, University of Tartu has a special arrangement for student licensing.

Here I must admit that my previous encounters with mechanical drafting was a long time ago, in high school, where we were supposed to manually draw various hypothetical 3D bodies on A4 paper and write labels using a strictly defined font. I recollect we even made one part manually according to that draft. I never enjoyed nor appreciated the course, and in fact never even understood the need for this whole drafting business: building things seemed so much easier without it. Well now I finally got it. It took me 14 years to understand the obvious. You draft something and then let other people manufacture according to it. Duh.

OK, back to the robot. Our first draft was that of a “brick on wheels” (note that this is using the N950, as this was before we got the N9). The dribbler and kicker are not present, but room is left for them. The electronics attachments are not present either, but are already planned to go onto the second floor.

In the second iteration, Taavi decided to position the camera higher up, on a tower. This would shift the weight backwards:

Finally, the third and the last iteration was completed by the beginning of October.

A couple of simplifications were introduced here. Firstly, the smartphone tower is now connected to the second floor – this makes it easier to assemble the robot. Secondly, the wheels are now directly mounted onto motor shafts. This means that the whole weight of the robot goes on those shafts and if our robot would have been too heavy, this might not have been a good solution. Fortunately, this is not a problem.

The small box in the upper right is the Bluetooth module, the black bricks are batteries (why two? stay tuned for a later post). The big box below contains the printed circuit boards for controlling the motors and the coilgun:

Most of the details of the chassis are to be laser-cut from aluminum (first floor, tower, electronic box) and plastic (everything else). The aluminum cutting was ordered in Metec, and plastic cutting – in Tööstusplast.